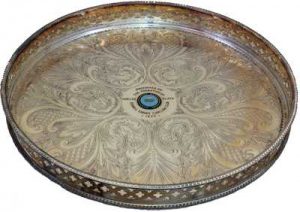 1977 was the Silver Jubilee of the reign of Queen Elizabeth II and the year in which Orwell Ladies Curling Club was formed.

Orwell, a long-established men’s curling club, were very encouraging, and presented the newly formed ladies club with a silver salver, known as the Jubilee Plate.

This became the trophy presented to the winning rink of the new club’s main competition, now called the Jubilee Competition. This is played as an annual league among as many teams as the club can support.